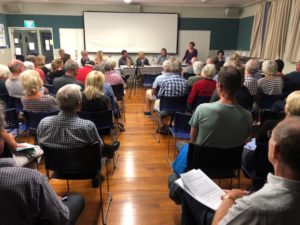 Tim King began with a 10-minute overview of the LTP and its focus on:

Residents questioned TDC staff regarding their intent to finish the legacy Ruby Bay stormwater plan stages 2 and 3. Mike Schruer answered he was unaware of the plans, then later amended that remark to say the stage 3 work was projected to happen this year.

As to whether there is any provision for building a standardized sea wall from Mapua through Ruby Bay, Cr. King said there is no current plan to extend the sea wall and suggested residents write a submission that also included funding strategies.

One resident questioned whether the plan to upgrade the sewer and water connections across the Mapua estuary would be moved away from Waterfront Park so that a regional boat ramp could be build in the park. Mr. Schruer responded that the upgrades would happen to the infrastructure currently in place. Cr. King added that using existing pipes would minimize the risk to disturbing the estuary.

Concern was expressed that the LTP focussed on stormwater upgrades in Richmond, Motueka and Pohara, and not Ruby Bay or the Mapua School. Mr. Schruer stated that smaller fixes in other communities will always be attended to despite this emphasis on these 3 areas, and that Mapua School’s system has been fixed.

For more information, go online to:  www.tasman.govt.nz/LTP.  The TDC intends to adopt their latest LTP by the end of June.

In other Association business:

The footpath on Higgs Road is almost complete and the contractors have started on installing the Refuge Crossing to Mapua School. The entrance to the Country Store and pathway around the Store will be permanently completed but the Refuge through the island will be fully completed later this year when the water and sewerage pipe work is carried out. The road in that area will be asphalted at that time.

It has been a wonderful growing season at Dominion Flats, for both plants and weeds but we continue to attack the weeds with weed-eaters and by hand. It is an ongoing process of course but many of the plants are now tall enough to beat the weeds and in time will create enough shade to suppress them. We have planted quite a number of cabbage trees, akeake and others that have been donated to the project so as usual, have been really busy with just a small band of helpers at present.

A start has been made on the back track which, when finished, will make a great loop for walking or biking.

We are having talks with Mapua School staff at present, who we hope will involve the students with the creation of a mural for the underpass and have applied for money from the TDC Creative Communities grant for materials for this.

We are currently looking towards our big planting days in May when we will have 4000 plants to get in the ground so will need many helpers. Mark your diaries for May 19/20 and 26/27 to join the planting bee.

There was a discussion about recent TDC correspondence regarding their intention to end the Waterfront Park Advisory Group’s work in favour of a new working group focussing on the implementation of the Mapua Waterfront Area Masterplan.  Tim King noted the intention is still to have a group comprising the entire community. Elena Meredith noted the need to maintain a cooperative partnership model.

A motion was then proposed (Elena Meredith/Helen Bibby) THAT:

The motion was LOST following further discussion.  Instead, the meeting AGREED that MDCA  representatives be mandated to maintain a cooperative partnership model.

Mapua School is making more ceramics to replace damaged art on the Aquarium Memorial Art stands at Waterfront Park. New “Do not climb” signs have been completed. Installation of the new kids’ tunnel and steps for Waterfront Park has been delayed due to TDC personnel being caught up with flooding issues but the goal is to get these place sometime soon. A motion was passed that “the MDCA apply to RATA Foundation for funds to cover the provision of a BBQ and shade sales for the Mapua Waterfront Park.”

Chairperson Elena Meredith suggested establishing a Water Infrastructure Sub –committee, noting this issue was a high priority for the MDCA some years ago but never eventuated.   A motion was passed “that a new subcommittee be established by MDCA with a focus on Water Infrastructures in Mapua and districts. This would include:

This sub-committee would liaise with TDC and invite input from and seek to work collaboratively with other related community interest groups such as Ruby Bay Coastal Property Owners.

Elena Meredith, Trish Smith and Wayne Chisnall met with Village Mall owner John Ritchie and landscaper Heidi Stewart regarding Ritchie’s intent to cut down the mature trees adjacent to Mapua Bakery. Elena noted that Ritchie and Stewart have a detailed plan with more planting and softening of the area which will be forwarded to the MDCA. Wayne noted that Ritchie is hoping to save the tree at the back.

Complaints had previously been heard regarding limited access to the Wharf boat ramp during a recent evening concert on the wharf attracting hundreds of people. Cr Tim King advised that the wharf landowners now will consult with the tenants and Sea Scouts each time an event application is made.

Elena Meredith suggested to the meeting that this newly formed group of Ruby Bay residents impacted by the recent floods be invited to join the new water infrastructure subcommittee.

Clare Kininmonth asked to amend the MDCA’s February meeting minutes on behalf of Martyn Barlow from the Mapua Boat Club noting that the minutes misinterpreted his comments about the boat ramp issue and did not reflect what he was saying. The Boat Club’s position is that “they need access to the existing boat ramp maintained until a solution is found.  As the TDC is supporting a regional boat ramp in the LTP, that is what Mapua may end up with.  Noted that the Boat club are not opposing a regional boat ramp but it is not the main aim of the Boat Club.” The meeting agreed to amend the minutes to reflect the Boat Club’s position.

Local climate change expert Tord Kjellstrom & his research team from the Ruby Coast Research Centre will present a brief report on how climate change will impact our local community and the world at large.  Be sure not to miss this important presentation, especially in light of recent climate events in our area.

Join us at for our next meeting: 9 April, 7 PM at Mapua Hall.