You are here: Home / Uncategorized / What Happened at the August MDCA AGM Meeting? 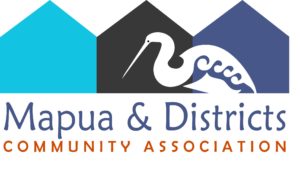 Selected from over 10 entries, Adi Tait’s logo entry took home first place in the Mapua & Districts Community Association’s new logo competition and took home the $150 prize at the 2017 AGM on 14 August.  Adi’s logo “utilises the image of the three old coolstores on the wharf, and a stylised version of Hamish the heron. The coolstores not only gives the impression of a mountain range which is a backdrop to this region, but of houses within a community.” Adi is an acclaimed local graphic designer, sculptor and multi-media artist who has participated in over 30 solo and group exhibitions in New Zealand and overseas. Other fine logo images were submitted by Ben Mills, Simone Jarmai Gill, Jeff Morris and 8 year old Milla Moon Waters. The MDCA thanks all entrants for their creative inspiration!

The results of the AGM’s officer and Executive Committee member elections saw Elena Meredith and Wayne Chisnall returned as Chair and Vice-Chair, and Mary Garner as Secretary and Aileen Connell as Treasurer.  Returning Exec Committee members are Helen Bibby, Colin Walker and Tim Hawthorne. New to the Exec Committee will be Mike Kininmonth, Trish Smith, Marion Satherly and Naomi Aporo.

The following members were approved for existing subcommittees and liaison:

Elena noted in her AGM Chairperson’s report: “As an Association we have made submissions [in 2016-71] on the Mapua Wharf/Waterfront TDC land development and proposal and The TDC Long Term Plan. We recognize that there is no “ Association viewpoint” on most issues and have encouraged robust discussions and presented multiple suggestions to reflect the diversity within our community. A wide range of speakers have formally presented at our monthly meetings. Input from individuals and other community groups keep our membership abreast of current thinking, strategies and affairs.

Projects covered this year include:

Aileen Connell noted in her Treasurer’s report that we have dramatically increased our paid membership this past year from 43 to 139. “We also completed a leaflet drop in letterboxes promoting the MDCA, this was part of our agreed strategy to promote the MDCA and make sure as many people as possible where given the chance to know we exist! We now use electronic banking for as many transactions as we can, this both helps us and those that we are paying. It is also making it easier for people to pay their membership. As of the 30th June 2017 we have $13,757.45 in our bank account, $10,000 of which is earmarked for Dominion Flats plantings.”

Helen Bibby reported in her Dominion Flats year-end update: “We have been successful with grant applications again and have received another $10,000 from Rata Foundation and another $4,500 from Pub Charities.” And that since this project started, we have received over $43,000 in grants from Rata Foundation, Pub Charities, Network Tasman Trust, Deloitte, Sargood Bequest, Greenwood Trust, Mapua/Ruby Bay Trust, MDCA, Fonterra Grassroots Fund, JS Watson Trust, World Wildlife Fund, Waimea Intermediate School, and Coastal News. We thank all these organizations for supporting such an important ecological cause.

Tim Hawthorne updated the progress the MDCA has achieved in Social Media: “MDCA’s Facebook page (www.facebook.com/MapuaCommunityAssociation ), launched in February, 2016, continues to perform strongly and serve as an important communications medium for the Association. Our FB page is now “liked” and followed by 676 people, a high number for a Facebook small community page. We post matters of community interest on the page on average 2 times per week and reach an average of 500 to 1000 people for each post. In 2016-17, we posted 119 items and were viewed over 50,000 times. Our June, 2017 posts alone were viewed over 12,000 times. Some of our posts reached over 3000 people in the Top of the South. Further distribution of the Association’s message is via posts on the local social media network “Neighbourly.” Our most successful post (“Please Vote on How to Honour the Mapua Aquarium”) reached over 9,600 people.”

A reminder to all: a comprehensive training on how to use the 3 public AED’s (automatic External Defibrillator) in Mapua will take place at 7 PM on Thursday, September 21 at Mapua Hall.  Everyone is welcome.